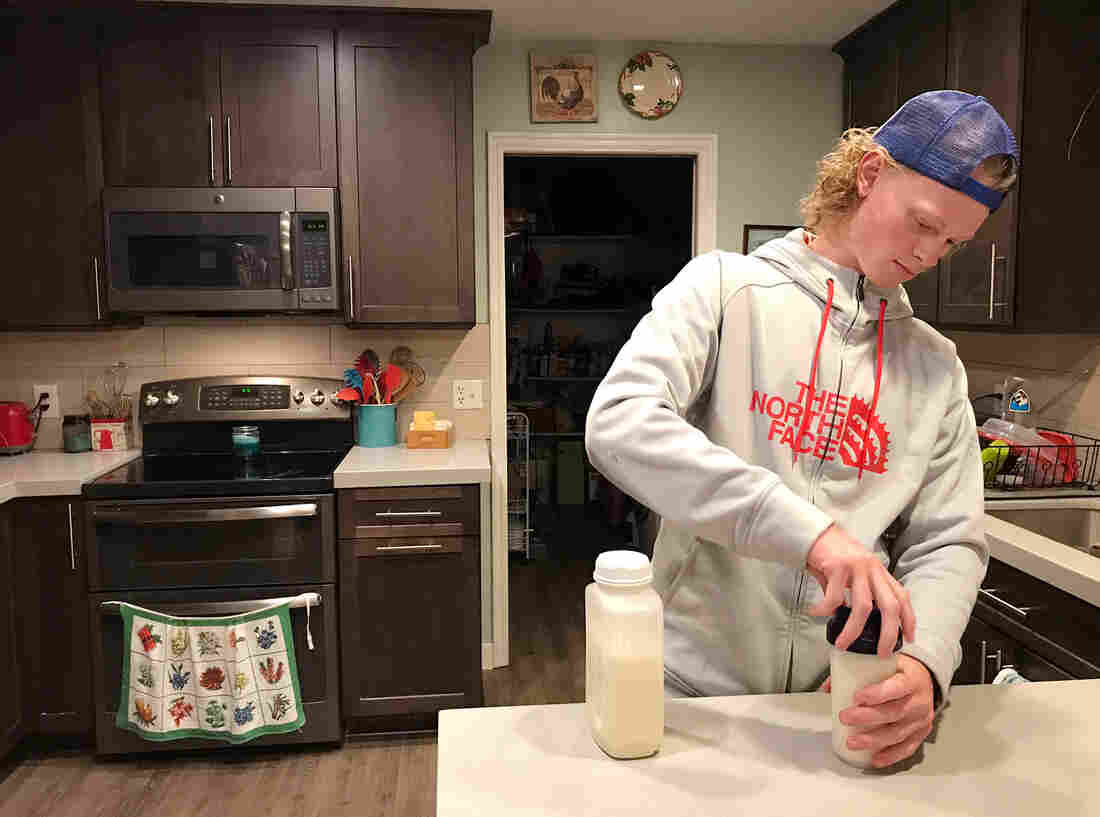 Instead of eating a typical breakfast every day, Jonah Reeder gulps down a special protein shake.

“The nutrients in it like to sit at the bottom, so I usually have to shake it up and get all the nutrients from the protein and everything, “says Reeder, 21, or Farmington, Utah, as a big plastic bottle.

Reeder was born with a rare genetic disorder called phenylketonuria, or PKU. If he eats meat, drinks milk or consumes other common sources of protein, toxic levels of the amino acid phenylalanine could build up his body and damage his brain

So Reeder gets his protein from the shake which is rich in other amino acids, vitamins and proteins that do not contain phenylalanine

But Reeder hopes to find a new approach to treating diseases. The idea is to use bacteria that have been genetically modified to do what Reeder’s body can’t get or phenylalanine. “” I’m really excited to help out and hopefully find a treatment for PKU, “Reeder said recently. as he prepared to volunteer for a study testing the modified bacteria.

The bacteria Reeder is part of a new field of medical research that has emerged from two realms of biomedical science. One is the study of the human microbiome, the microbes that inhabit our bodies. The other is synthetic biology, a field that looks at genetically engineering living organisms, including bacteria in the human gut.

“It’s a new world of being able to use synthetic biology to treat microbes to treat diseases, which I believe is the future, “says Pamela Silver, a synthetic biologist at Harvard Medical School in Boston.

Scientists hope to genetically modify microbes from the human microbiome to treat a range of diseases, including digestive disorders like ulcerative colitis and inflammatory bowel disease. ] “Microbes are something that we as synthetic biologists see as highly engineer-able. We understand how to engineer microbes so it looks like the perfect interface between synthetic biology and health,” Silver says.

One company, Actobio Therapeutics, Inc., of Ghent, Belgium, has just started using genetically engineered microbes to try to treat Type 1 diabetes. Another one, Oragenics, Inc. of Tampa, Fla., Inc., is testing a modified bacterium to treat mouth sores caused by cancer chemotherapy. And Osel, Inc., or Mountain View, California, engineered microbes to prevent HIV infections. Reeder is helping test modified E. coli bacteria. While some types of E. coli can cause serious illness, the E. coli type being used in the study is found in the human gut.

“It is a naturally occurring probiotic bacteria,” says Caroline Kurtz, a scientist at Synlogic, Inc., of Cambridge, Mass., which created the modified version of the organism

“We can enhance its function by introducing genes [or] by changing genes that are there, and design the cells to either produce something or consume something that may be beneficial for a patient,” Kurtz says

Synlogic has also engineered E. coli to rid life-threatening levels of ammonia from the bodies of people with cirrhosis of the liver.

“This is really a new modality that allows us to think about therapies in a new way and really look at diseases in a whole way: Kurtz says

Preliminary research involving mice and healthy adults published recently in the journal Science Translational Medicine indicates Synlogic’s E . coli are safe and may work. So the company is now testing in patients with cirrhosis and PKU

For his part, Reeder admits he was a little nervous when he first heard about all this. you think: sickness, throwing up. So I was a little bit skeptical. I wasn’t sure what to think because I was going to be ingested. E. coli ] But the more he learned about it, the more excited Reeder got about trying the engineered microbes.

Reeder spent the weekend in the clinic so doctors could monitor him closely and run tests as he entered what normally would be dangerous amounts of protein. He then swallowed either the engineered E. coli or in placebo. He wasn’t told which.

“It was liquid solution. It tasted kind of like mint taffy. It was pretty sweet,” he says.

Much more research is needed to know whether genetically engineered microbes are safe and really work. But Synlogic will report to the cirrhosis and PKU studies later this year.

Any of these experimental treatments could be used routinely, they would have been reviewed and approved by the Food and Drug Administration. That’s a process that could take years.