As the anti-polio campaign enters the third day across the country, it fails to continue in 24 UCs of the province. 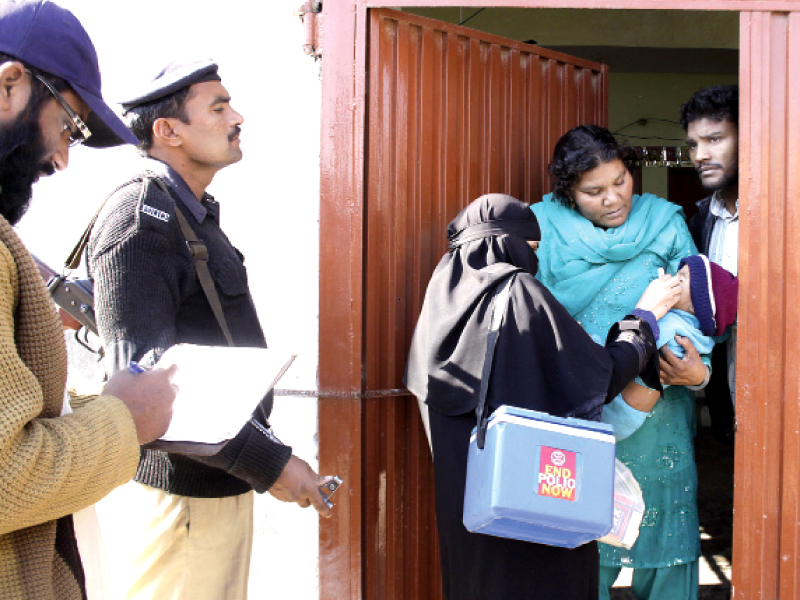 As the anti-polio campaign enters the third day across the country, it fails to continue in 24 UCs. PHOTO: EXPRESS

PESHAWAR: At least nine more people, responsible for vandalizing government properties during riots in the city over fake news that hindered anti-polio campaign in Khyber-Pakhtunkhwa (KP), were arrested in the provincial capital on Wednesday

As the anti-polio campaign entered the third day across the country, it failed to continue in 24 Union Councils (UCs).

A special team, led by SP Saddar division Sahabzada Sajjad, was formed to arrest the culprits. The arrested men &#821

Panic spread across the CP on April 22 after reports emerged that several schoolchildren were rushed to nearby health facilities after consuming anti-polio vaccine. Both the school administration and the affected parents suspected the children got sick because of the polio vaccine. However, health officials rejected their claims. Family members and residents resident resorted to agitation in protest against the incident and burned down a health facility in Peshawar.

“The arrested man had attacked the Basic Health Unit (BHU) to sabotage polio campaign in K-P. More raids are being conducted to arrest persons involved in the Peshawar rioting. Two Kalashnikov rifles and pistols were also recovered from their possession. ”

“ The suspects were involved in vandalism and siege and arson. The principal of the private school, who played a key role, has gone into hiding but will soon be arrested, “said Peshawar SSP.

SSP Operation Zahoor Babar Afridi added,” The polio drive is successfully underway across the district, except in Peshawar’s Mashokhel area. Additional security has been provided to the polio teams. ”

He insisted that the public should not believe in the rumors and that one would be permitted to take law in their hands. several polio teams were sent to the suburban areas due to security threats.

“The parents are fully co-operating in other areas. The target is to administer polio drops to 7.6 million children of K-P. 24, 18, 000 children have been given a few drops in the last two days. ”

target of administering polio drops to 6, 28,000 children during the campaign. ”