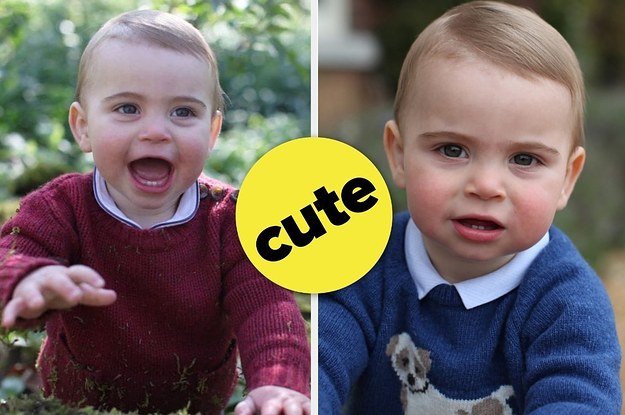 On Monday, the royal family in Britain released three new photos of Prince Louis in honor of their first birthday.

The photographs were taken earlier this month by the Duchess at home in Norfolk.

To no surprise, the pictures are SUPER cute.

Handout / Duchess of Cambridge via Get It

See how much he is adult!

Handout / The Duchess of Cambridge via Get

Look at that smile!

Handout / The Duchess of Cambridge via Get

You remember that the little prince was born last year on April 23.

He was born at 11:01 and weighed 8 pounds, 7 ounces. Although Cambridge’s announced Prince George and Princess Charlotte’s name fairly quickly, they waited four days to tell the world that they had named their new son Louis Arthur Charles.

The members of the royal family have increasingly used social media to bypass the press and release news and photographs directly to the people. Prince Harry and Meghan Markle, aka Duke and the Duchess of Sussex, have recently created their own separate Instagram account for this purpose.

Like the pictures released on Monday, many of the royal children‘s photos were taken on Instagram by Kate, including the first official images of Prince Louis from May.

The Duchess has taken many of her children’s official photos over the years, including the first images of Prince George and Princess Charlotte together.

The royals have just shared some pictures of Prince Louis over the past year, as this ADORABLE one from his baptism in July July.

Since he is, you know, a baby, little Louis was absent from the big royal events last year, including two royal weddings.

Prince Louis was also seen in the family portrait on Cambridge’s Christmas card.

And he was presented in a series of family photos released for his grandfather, Prince Charles’s 70th birthday.