Months after natural gas explosions and fires level homes in the Boston suburbs and left thousands without heat or water, families throughout the region are still struggling for Thanksgiving.

More than 2,000 homes are still without gas service in Lawrence, North Andover and Andover after gas lines were overpressurized during an otherwise routine pipeline replacement project and triggered dozens of explosions and fires on Sept 13. One person was killed, dozens were injured and over 100 structures were damaged or destroyed in the blasts.

” It’s hard because I do not have anything to cook for my kids, “Hilda Delgado told Boston 25 News. “I’m stressing. For cook, we have nothing. No stove for tomorrow. It’s hard, we have no dinner for tomorrow.”

,500 people spend the holiday in hotels, apartments, and trailers Columbia Gas. The utility is responsible for the Sept. 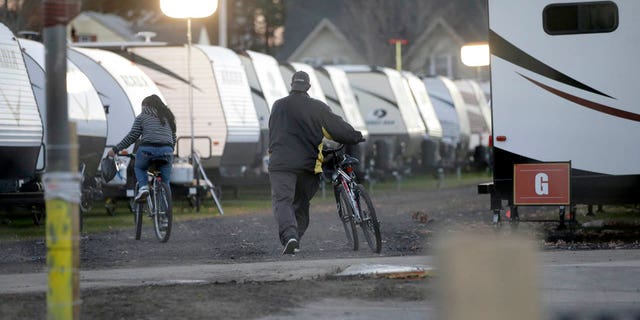 While some residents have chosen tough it out in chilly homes, more than 1,500 families spend the holiday in hotels, apartments and trailers paid by Columbia Gas.

” It’s hard because I do not have anything to cook for my kids, “Hilda Delgado told Boston 25 News. “I’m stressing. For cook, we have nothing. No stove for tomorrow. It’s hard, we have no dinner for tomorrow.”

At a trailer park set up on Lawrence’s South Common, Jose Grullon told the Associated Press that his family’s holiday would be more subdued than usual. The 45-year-old, his pregnant wife and two young children moved into a trailer last month after it became too cold in their apartment. 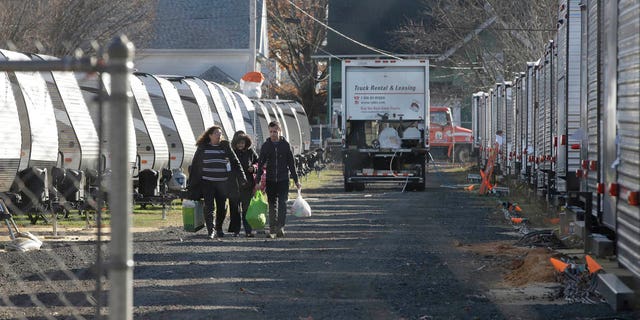 In this Wednesday, Nov. 14, 2018 photo Sonia Geha, left, and her mother Laila Eid, second from left, both of Lawrence, Mass., Carry belongings as they leave a trailer camp for people displaced by gas line failures and explosions on Sept. 13, 2018.
(AP Photo / Steven Senne)

Like the most affected homes, theirs did not suffer any fires or explosions, but the hot water heater, boiler and other gas appliances were compromised by the overpressurization and need to be replaced before gas service can be restored.

Grullon said the family’s trailer is simply too small to host the festive party he usually throws for family and friends, with food from his native Dominican Republic, dancing and music. The family will instead eat the turkey dinner Columbia Gas is providing to trailer residents.

Officials are concerned about water pipes and tanks freezing as temperatures dipped into the teens on Thanksgiving, and spent the early part of the week adding insulation under trailers and making sure every unit has sufficient propane for heating. 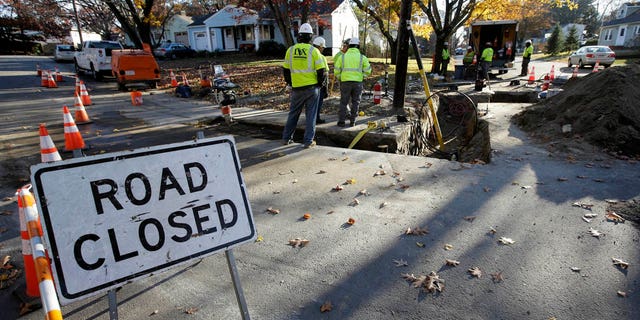 “We knew it was going to be cold, but most people do not spend the winter in an RV,” said Scott Ferson, a spokesman for Columbia Gas. “So it has provided some unique challenges.”

After missing a Nov. 19 deadline, Columbia Gas now says the region’s gas service should be fully restored by December.

“We are finding a lot of code issues,” Ferson tol the AP. “Each house needs to be addressed almost individually.”

The Associated Press contributed to this report.